Submenu on the topic Press Releases

Learning about migration as a migrant: the experiences of 4 students in Osnabrück

Diana, Valeria, Jahir and Diana are four students from the University of Costa Rica with different careers, but one factor in common: their desire to learn about migration and apply it in their professional lives. Therefore, they participated in the Summer School "Facing the Future: Migration and Intercultural Dialogue in a Sustainable Society", celebrated at the University of Osnabrück in Germany.

July 2019 marked the tenth anniversary of the international Summer Schools, to which the University of Osnabrück welcomed more than 40 students from various countries around the world. Over a period of several weeks the students had the opportunity to participate in seminars, lectures, and workshops, which were specially designed for this activity and took place on the premises of the Schools involved.

Students from Costa Rica, Nicaragua, Guatemala and Bielefeld are visiting Osnabrück and participating together with students from the University of Osnabrück in the Summer School "Facing the Future - Migration and Intercultural Dialogue in a Sustainable Society" of the Costa Rica Center. The program of the Summer School covers the two main topics Migration and Intercultural Dialogue in sustainable societies. The students are having the opportunity to debate about both topics from a Costa Rican/Central American and a German/European perspective in an international and intercultural comparison.

It is a great opportunity for an intensive exchange with Central American students: From July 15th to 30th, the Costa Rica Center of the University of Osnabrück will organize a transdisciplinary, international and intercultural comparative Summer School on "Facing the Future: Migration and Intercultural Dialogue in a Sustainable Society". 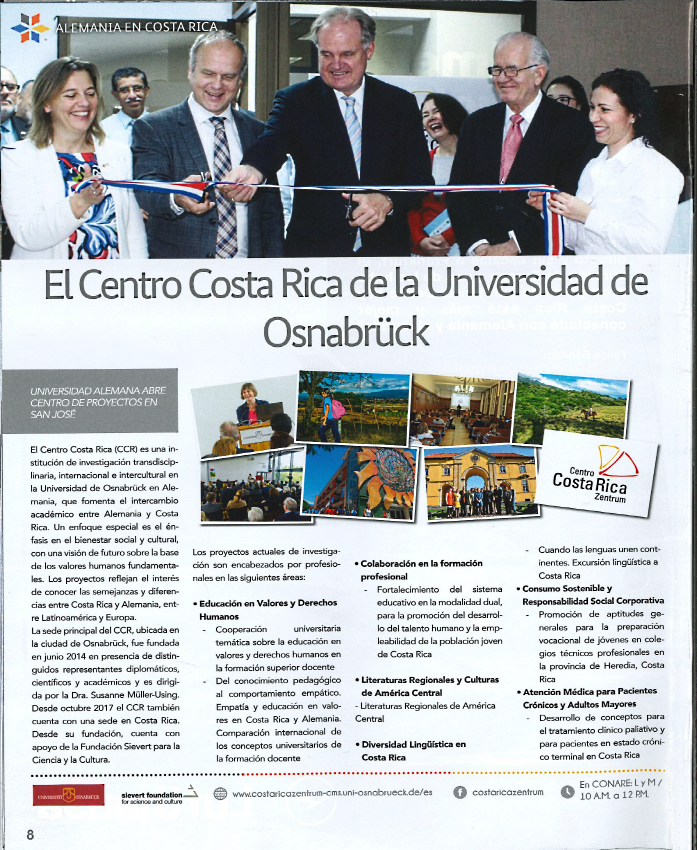 You may download the article as PDF here (in Spanish)

On October 3rd in San José, the rector of the Universidad Técnica Nacional (UTN), Marcelo Prieto Jiménez, and the vice president of the University of Osnabrück, Thomas Bals, signed an agreement for future scientific cooperation in the vocational sector. The participants included the Costa Rican Minister of Labor Alfredo Hasbum Camacho, the deputy director of the International Labor Organization (ILO) Leonardo Ferreira Neves and the Director of the Centro de Formación Pedagógica y Tecnología Educativa at the UTN, Ricardo Ramírez Alfaro. 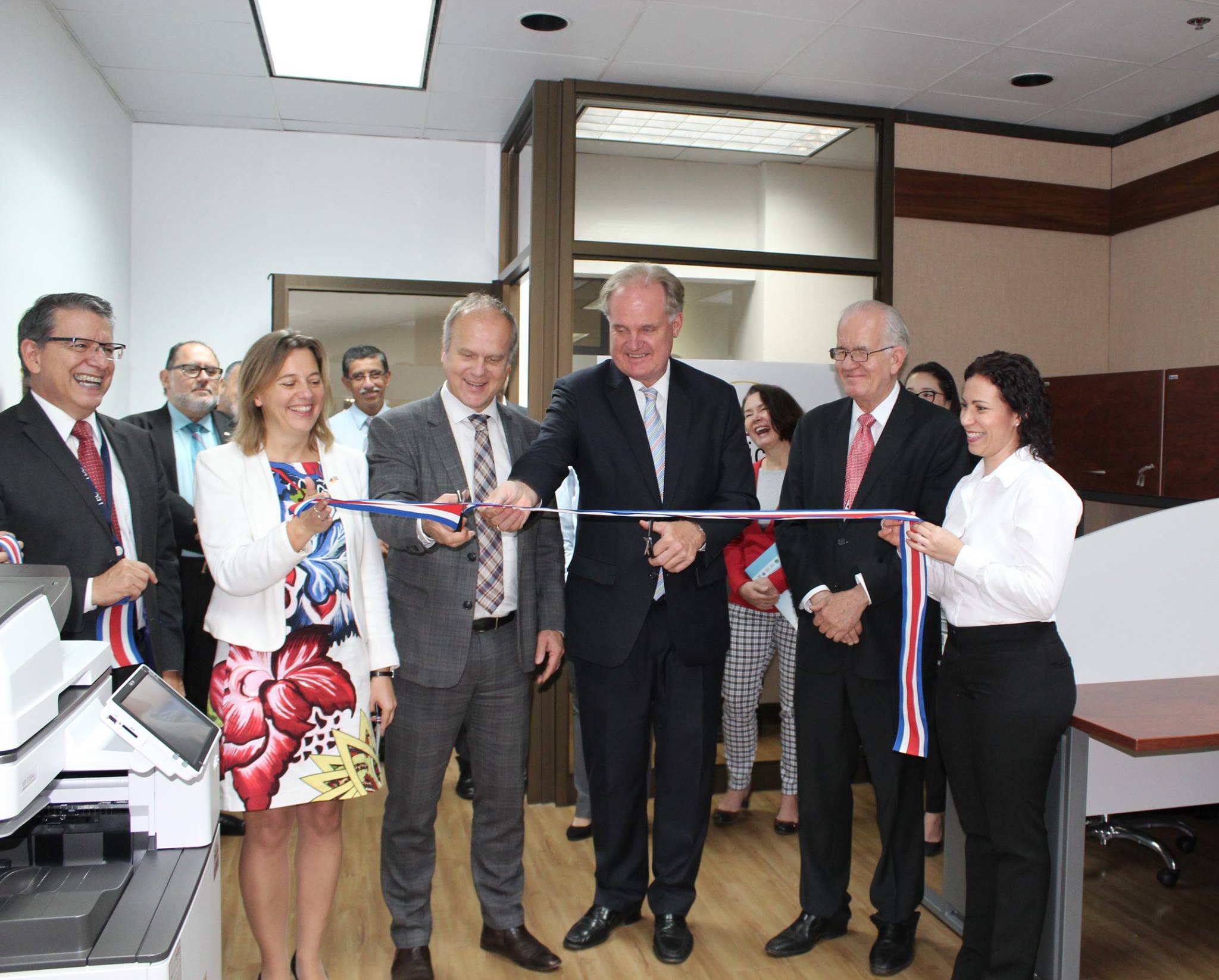 The Costa Rica Center (CRZ) of the University of Osnabrück has now a branch office in the Consejo Nacional de Rectores building (CONARE) in San José, Costa Rica. The official opening ceremony took place on October 2 in the presence of German Ambassador Ingo Winkelmann and numerous honorary guests. 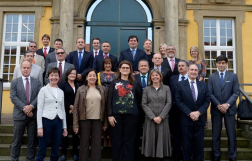 On Monday October 17th, the ambassador Giancarlo Luconi Coen visited the University Osnabrück with a delegation from Costa Rica. Teacher training and the adoption of a dual vocational education in Costa Rica was the main point of the discussions. The guests were received in the Osnabrück Castle by the University President Prof. Dr. Wolfgang Lücke. In the afternoon a reception was held at the Freedom's Hall of the Municipal Building from Osnabrück with a new entry on the city's gold book. The project to setup a center for international expertise in vocational education in Costa Rica had the academic support of the Costa Rica Center from the University Osnabrück.

Here you can find an article from Mr. José Joaquín Chaverri Sievert about the topic of scientific cooperation between Costa Rica and Gemany (in Spanish), published on the 14th September 2016, in: La Nación.

UCR between the 20 best universities in Latin America! 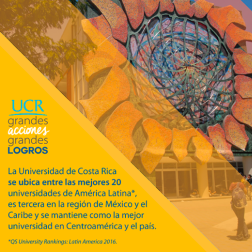 Prof. Sievert Entrepreneur of the Year in China 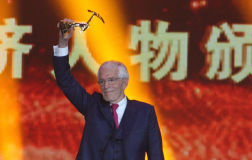 Prof. Dr. Hans-Wolf Sievert, a Chinese commissioner and honorary professor at the University of Osnabrück, has been appointed "entrepreneur of the year 2015" by the government of the Chinese province of Anhui in acknowledgment of important accomplishments in the interest of German-Chinese economic relations. 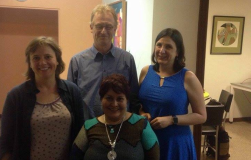 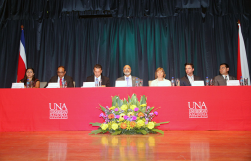 Students begin their participation on the course imparted by the Colegio Humanístico (CH) of the UNA. The CH aspires to further develop a worldview that strives for a better planet in tune with current environmental challenges. Dr. Susanne Müller-Using was invited to participate on the main table as Director of the Costa Rica Center.

Present are:
Dr. Alberto Salom, Dean of the UNA
Dr. Roberto Rojas, Senior member and Dean of the UNA for Estudios Generales M.Sc. María Ángela Sánchez Quirós, Director of the Colegio Humanístico
As well as international guests from México, United States and Germany.

Reception held by the German Embassy in Costa Rica 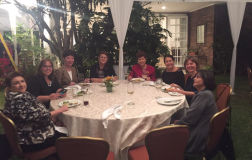 Collaborators of the Costa Rica Center during the reception held by the German Embassy in honor of the visit of the Minister of Education and Research, Dr. Johanna Wanka, to Costa Rica.

In the photo are the members of the Costa Rica Center present in the reception together with the Costa Rican Minister and Vice-Minister of Public Education: 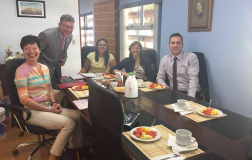 In the context of the visit to Costa Rica of the German Minister of Education and Research, Prof. Dr. Johanna Wanka, a series of conferences and talks were held together with Dr. Susanne Müller-Using (Pedagogy, Director of the CRZ), Prof. Dr. Martina Blasberg-Kuhnke (Catholic Theology, Spokeswoman of the CRZ) and Prof. Dr. Karsten Müller (Intercultural Psychology, Member of the CRZ). The meetings to strengthen cooperation were held in the UNA with the Colegio Humanístico, the Centro de Investigación y Docencia en Educación, the Escuela de Administración, the Escuela de Ecumencia de Ciencias de la Religión and the Centro de Estudios Generales. At UCR, Dr. Susanne Müller-Using together with Director Dr. Mónica Arias declared open the Doctoral Program for Pedadogy. 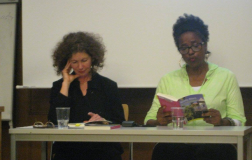 The Costa Rica Center and the faculty of Language and Literary Studies invited to a lecture in German and French language as part of the interdisciplinary series of lectures „Entre las Américas / Between the Americas”.
Kettly Mars, Port-au-Prince, Haiti, read from her new book »Je suis vivant« (I am alive) on wednesday, 21 October.

28 July 2015: This summer the Osnabrück University will once again host three international summer schools. Students from all over the world come to the university for three-week specialized courses. In addition to the programmes on health science and intercultural psychology, this year for the second time the Department of Biology/Chemistry is organising a summer school dedicated to the topic of "Biodiversity".

Three students from Costa Rica, who took part in the Summer School "Intercultural Competencies", were provided with a stay in Osnabrück by the Sievert Foundation for Science and Culture.

Summer School under the topic of "Biodiversity"

Opening of the summerschool 2015 in San José, Costa Rica 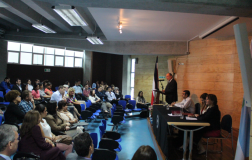 20th of July 2015: The summerschool "Facing the Future - Universal Values and Peacebuilding towards a cohesive and sustainable democratic society" was opened by Mr. Henning Jensen, Rector of the University of Costa Rica (UCR). 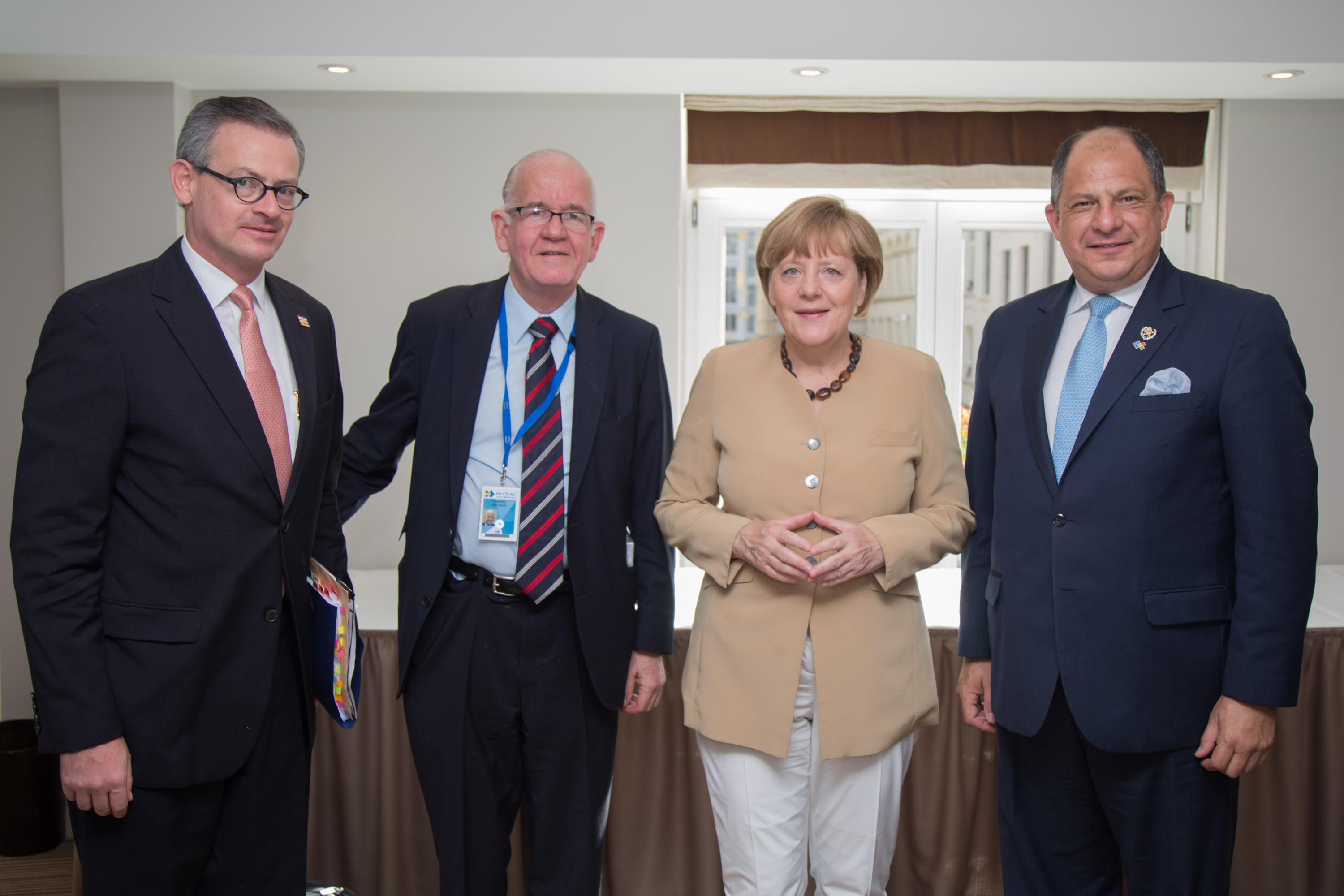 The German Chancellor, Angela Merkel, and the President of the Republic of Costa Rica, Luis Guillermo Solís, assembled in Brussels. 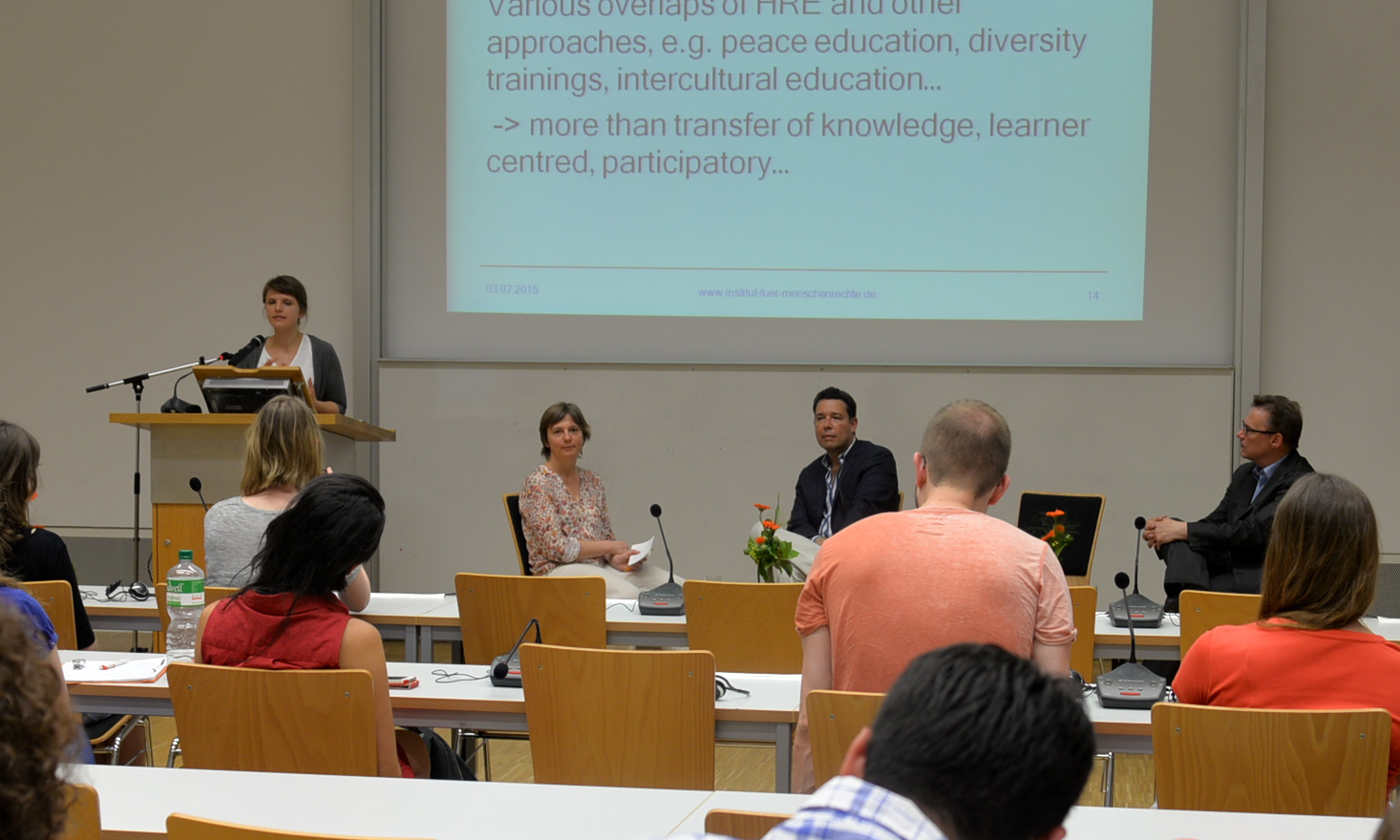 Human rights and human rights education are of vital importance for democratic politics and a democratic culture as they protect human dignity. The Costa Rica Center presented a discussion between the director of the Inter-American Institute of Human Rights, José Thompson, and Mareike Niendorf from the German Institute for Human Rights.
Moderation: Dr. Susanne Müller-Using and Prof. Dr. Peter Schneck 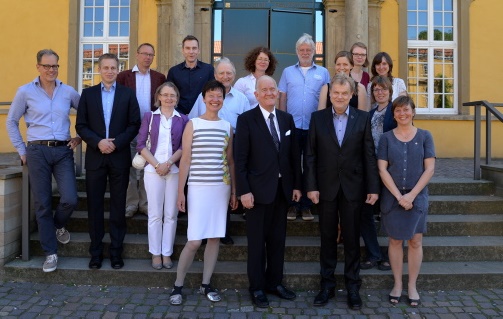 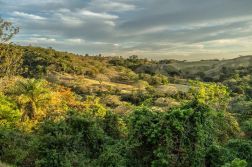 08 April 2015: What is the situation regarding human rights in Colombia? With what conditions are women especially confronted there? Ana Mercedes Pereira from Bogotà will answer these and many other questions on Thursday, 16 April, from 18.30 to 20.00 during her visit to the Ledenhof. Admission is free.

23 March 2015: What constitutes German environmental policy? What are the focal points of sustainable action here and do experiences exist that can also be of use to other countries? The Costa Rican Environment Minister, Dr. Edgar E. Gutiérrez-Espeleta, received answers to these and other questions during a visit to the Osnabrück University. He was accompanied by the Ambassador of Costa Rica to Germany, José Joaquin Chaverri Sievert.

05 February 2015: As part of the "Summer Schools Abroad" programme, the German Academic Exchange Service (DAAD) is funding a new cooperation project between the Osnabrück University and six partner universities in Costa Rica with 25,000 euros. 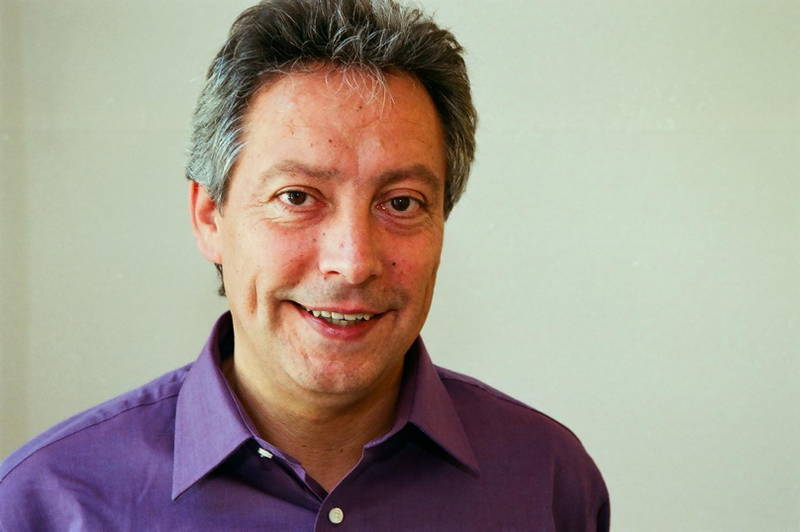 On Thursday, 29 January, the Institutes for English Studies/American Studies and Romance Studies of the Osnabrück University, in cooperation with the Costa Rica Center, invited to a lecture by an internationally award-winning Romance linguist. Prof. Dr. Ottmar Ette from the University of Potsdam, member of the Berlin-Brandenburg Academy of Sciences and Humanities since 2012, spoke in the university building at Süsterstraße 28, Room 44/E03, about "Central America between continents: Literary Archipelagos and Moving Landscapes of Theory". (»Mittelamerika zwischen Kontinenten: Literarische Archipele und bewegliche Landschaften der Theorie«) 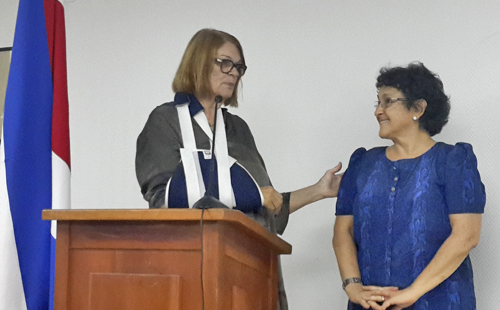 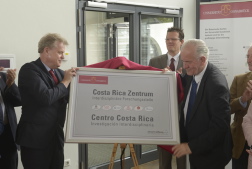 01. July 2014: At the Osnabrück University a "Germany-wide unique" Costa Rica Center was opened on the weekend. The aim is the transdisciplinary and intercultural comparative exchange of science between Germany and Costa Rica. Numerous guests of honour from Germany and abroad attended the ceremony in the Bohnenkamp House of the Botanical Garden, among them Ambassador José Joaquín Chaverri Sievert. 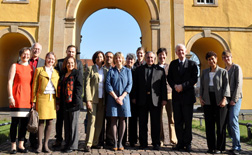 20 June 2014: Costa Rica has been the focus of several subjects at the Osnabrück University for many years. Now the activities are to be bundled in the form of a research center. The aim of the new Costa Rica Center is the transdisciplinary and intercultural comparative scientific exchange between Germany and Costa Rica. On Saturday, 28 June, the opening ceremony will take place at 10 a.m. in the Bohnenkamp House in the Botanical Garden of the University. 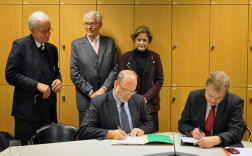 05 November 2013: On Monday, 4 November 2013, a delegation from the Universidad de Costa Rica (UCR) accompanied by Ambassador José Joaquín Chaverri Sievert visited Osnabrück. Rector Prof. Dr. Henning Jensen signed a cooperation agreement with the Osnabrück University. It is also planned to establish a Costa Rica Centre at the Osnabrück University in the future. The initiative is supported by Honorary Consul Prof. Dr. Hans-Wolf Sievert.