Submenu on the topic Who we are

You are here: Startseite > Who we are > History

History of the Costa Rica Center 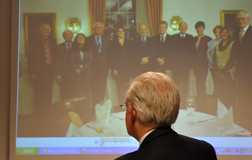 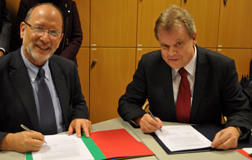 The interdisciplinary research center „Costa Rica Center“ already has a (short) history to look back at. It begins with a visit from His Excellency, the ambassador of Costa Rica, Mr. José Joaquin Chaverri Sievert, at the University of Osnabrück in June 2011. Already during the first meeting with the former University’s Vice President Prof. Dr. Martina Blasberg-Kuhnke and the honorary consul of the Republic of Costa Rica, Prof. Dr. Hans-Wolf Sievert, clear ideas existed regarding the cooperation between both countries and their Universities.

The ambassador’s vision was “to do something good for the children” and to put it to practice through a cooperation with the field of education, mainly the teacher training and value education at the University of Osnabrück. As the Biology and the Psychiatry department of the University already maintain historically evolved research relations with Costa Rica, and as the Theologies, the Romance studies and Economics have also been in contact with Costa Rica for years, it made sense to pool all the activities by creating an interdisciplinary Costa Rica Center. The pro-active working group Costa Rica was founded. Working together closely, the group prepared the visit of a delegation from Costa Rican partner universities as well as the foundation proposal for the Center. The dynamic cooperation of the first one and a half years helped advance the construction of the Costa Rica Center, until in April 2014, the senate and the committee agreed to the Center’s opening. Thanks to the substantial and long-term support of the project by the Sievert foundation for science and culture (“Sievert Stiftung für Wissenschaft und Kultur”), the Costa Rica Center could be officially opened on 28 June 2014 in the presence of the ambassador, Mr. José Joaquín Chaverri Sievert, the management of the University of Osnabrück as well as six Costa Rican partner universities.

Exciting projects in the area of interdisciplinary, international and intercultural scientific exchange lie ahead of us!